2019 for us personally, should have been our best year what with Nik coming to work in the shop full-time and all…Sadly due to a couple personal tragedies and some disasters at home (yes we do have one!) it has been not so great.

Some of that bad luck has carried over to our business and we have been forced to replace several PCs and Scanners and other equipment that in hindsight looks to have just committed suicide on us…but thanks to you, and our other brilliant customers we’ve got through the worst of it!

In coping with all that has to work so hard…but because business has been good (thanks again to you guys) and has kept on growing. This not only enabled us to manage the above but to fight back too, it meant were were able to upgrade….to get a newer more capable minilab, new printer, and we have just acquired a Noritsu HS-1800 film scanner.

Top of the pyramid kit that will enable us to provide a broader range of scanning options. We’ll keep that simple though and just use the extra capability of this to offer upgrades in terms of scan quality that everyone is already happy with.

In fact film processing has been a huge growth area, but that must surely be in keeping with the huge resurgence that is happening in this “analogue” sector of the modern photographic market?

Well, that’s not news to us here at Nik & Trick!   It is exctly what we have continually been seeing since 2013 and perhaps we can now, move on to prove more convingly to the non-believers show that film really does rule!

Let’s consider by way of example, taking a look at what Kodak have said in recent announcements, something which is comprehensively being underlined by news from their main UK distributor who mailed us just days ago to inform us that Kodak have had to cancel ALL trade backorders as they have little hope in honouring them at this present time.  Reason being?  That’s right, they just cannot keep up!

That simple truth has, again been evidenced this year as it was in 2018, by further product droughts so, it should now be quite clear: demand for film across the board has well and truly outstripped some/many supplies.

For now however this is a bit of a double-edged sword.   Digital photography killed off investment in the film market for the past decade, it’s now caught up like a big ping of knicker elastic.

So in January we’re going to see some pretty hefty price increases from Kodak…we did make a post on Facebook regarding the negative clickbait surrounding this and were expecting to get a lot of unhappy response. It wasn’t forthcoming.

(almost all the clickbait we see, the posts are not a good thing, oh so much seems to be worded and aimed at stirring things up, that’s how the authors (who never seem to take photos we note) get the attention they crave….as far as we can see!) In fact it was so lovely to see that amongst our customers at least, the , sorry, overall consensus of opinon is that people are okay about that rise…they didn’t mind saying “Happy to pay the prices as long as it’s invested back into the film business”

And that is exactly what is going to happen. Kodak have been good on this, and have done well in terms of communicating what they are thinking to you, whereas with the 30% that Fuji added early on in 2019 we still have nothing, but is this the big two thinking alike? So the Acros II that is due in Europe in Jan 2020 (we’re told)…is that a pre-cursor maybe?

Maybe but looking back, 2019 brought some good stuff too…most notably by far is Bellini Duo-Step, the wonder product of the year!

We asked them to make a replacement for the lamented Diafine and they came up trumps…what a product that developer is…absolutley remarkable, take a look at our test photos in it’s product gallery.

The same applies to the FotoFlow we had them formulate when we went there in September.

Naturally we asked for it so we must use it in order to demonstrate, thus in our darkroom we’re now seeing the cleanest black and white we’ve ever seen!

Biggest hit in 2019 though was our new website it was a lot of work and we must thank everyone that has helped us with testing and decision making and feedback. Very very pleased with the end result and we are too…though websites never do have an end!The visual impact, ease of use and overall efficiency is lovely…it works beautifully across almost ever screen size from mobile phone to your home cinematic super TV screen….we are told by you and YOU matter!

There’s going to be a lot happening in 2020 that may cause some intial teething shall we say!

Yes Brexit is coming…we’ve already had the doom merchants to calm down: “It will be the end of film photography in the UK” shouted one grumbler!!

To which we are left having to point out that, most of the film products we sell are produced domestically or come from the a rather large manufacturer in America.

Ok we have our dealings in Europe too of course, but that means four to five orders from Germany each month and a pallet or two from our great friends in Italy.

Avoiding the why, when, what for and where and such, it appears that even a “No Deal” exit whereby the Goverment has been saying and put in place since July….means no tariifs on something like 87% of imports…this inculdes the products we all love, so until we know otherwise there’s nothing, not a thing that anyone can say about this and even if they do the goalposts are likely to move anyway as things adjust and things DO have to find their own levels….a bit like film and digital have! 😉 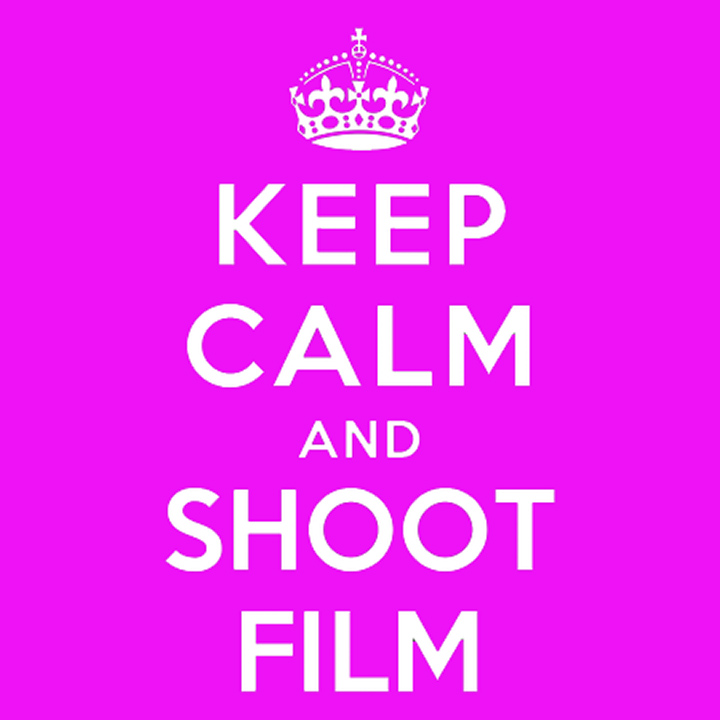 around this event that may affect us are already taken care of. We use Royal Mail and Parcelforce for the bulk of our deliveries and they have done a cracking good job on this so everything is fully in place a lot of hard work has been invested so no point worrying!

Same applies to customs, they’re ready and have been all year!…You see we are located beteen two of the biggest entry points into the UK and have mates working all over those sites who kindly share info with us on top of the superb comms from their bosses (inthe case on the Customs and Revenue folk)

All in all the best thing to do is Keep Calm and Shoot More Film. Let the fuss die down but carry on with doing the one thing in life that can make us all smile 🙂

It will be Photokina year again and that was outlined to be our next years working break. Organisers of that event have chosen to ignore what is really going on in photography right now….so almost none of their big usual attendees, Nikon, Olympus, Canon and so on are going.

Also once again it is sad to note that there has been zero recognition of film related stuff so very sadly that looks like it will not be very good this time and there will be little point to us attending. We shall see but that is how it looks from here. 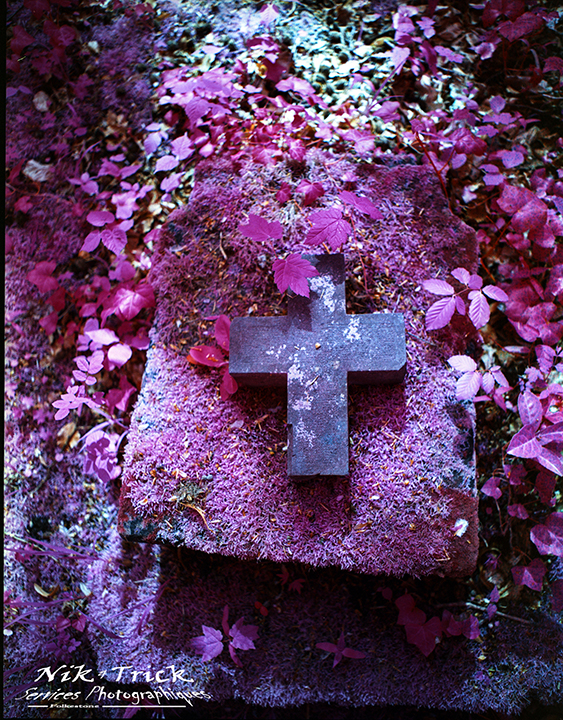 In terms of breaks we did briefly this year get to France in the spring where we shot the photos on colour infra-red CIR that so many of you so kindly admired, here’s a sample in case you forgot or didn’t see.Then of course our big gig of going to the new Bellini factory near the beautiful city of Perugia.We’ve prepared a nice article about us and the Bellinis so below are for the first time are some photos from our time together there. The full feature of this will be one of the first we publish on Richard’s new website. The one that was going to be done last year due to all his spare time…that he didn’t get! Joking aside it must be done this coming year.

Before we end up this seasonal message, enjoy some photos from the Bellini factory…all bar one, consciously and deliberately shot not digitally but using my beloved Pentax LX.  All with Kodak film, Tmax400 or Portra 800.  Back home everything then developed using Bellini chemistry ~ and of course, why would we do it any other way?! 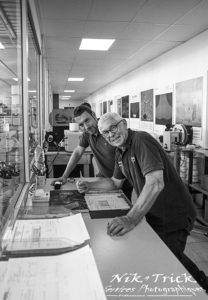 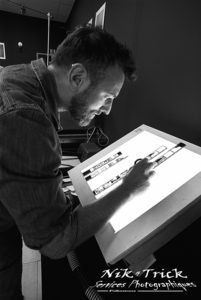 E6 Testing is Continual....this photo in particular shows how good Tmax400 is with Hydrofen 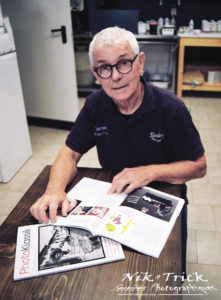 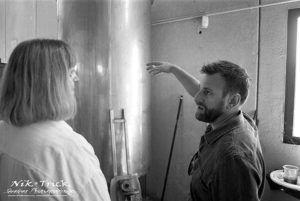 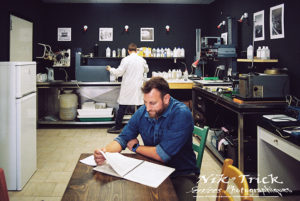 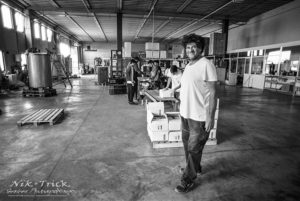 Stefano, a gentleman, in charge of production...he makes your C41 kits! (and more) 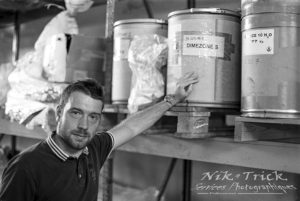 Looking into the future and the colossal amount of work involved I am minded that:  Really hate doing websites!  We only recently found something that has a remote chance of presenting photos and the stories around them to our satisfaction so the original concept has remained but the idea and plan now has changed totally.

It’s been both a pleasure and humbling dealing with these archives.  And Terry’s has become a good mate now and we both love photography more than words can tell. I think the same situation would have applied to John had he lived!

The ideas go further also, we hope to have some of Mayotte’s important work to show and there are others too but who knows…maybe a few by some of our customers?

That’s far too much writing but we hope it is of some use to someone and if you have made it this far and not nodded off too often then that’s great! Ultimately what we’re saying here is that 2020 stands to be a bit of a topsy turvy time. …for a while perhaps or at least even.  Don’t let that worry you or defer you in any way from what you love to do.

What we’re seeing now, what is really happening is just this; the future of film photography is very very rosey and this truly is a great time to be involved.

(Disclaimer:  We don’t have a crystal ball and thus cannot confirm what the future really holds….only hindsight can do that, so anything written above may vary!  So there!)